This game is created in one week for Let's Create Game Jam #2. The title of this game is inspired by a famous poem. You can learn more about the poem in the game :)

Help Santa collect all the stars to complete the poem.

Use WASD/arrow keys or gamepad to move.

Press P to pause the game and check your progress (or click on the Pause icon on the upper left) .

Touch controls: Tap and hold anywhere to move the sled.

Design, code and art by Siepiau.

Game created using Unity game engine. I started off with the idea of creating an endless runner but ended up with a 3D flier with a Christmas theme.

Graphically, no lighting or fog is used, just two custom shaders. One shader, used for the stars and environment, fades into the background color based on camera distance. The other, used for the main characters, has a rim shading effect and vertex shader that bends the mesh (thanks to this helpful post http://blog.onebyonedesign.com/games/unity3d-endless-runner-part-i-curved-worlds...). The PC version has better anti-aliasing and some post-processing effects, but not too overtly different.

3D modeling and animation using Modo and Houdini. The sleigh and reindeer setup is a 3D scene I built and animated some years ago for sale on Turbo Squid. I re-purposed and optimized it for real-time. The environment is a grid plane pulled by hand into a simple looping terrain. I used Houdini to randomly scatter the low-poly trees on the terrain.

Audio effects edited using Audacity. All music and sound effects are from open source as far as I know.

Because the gameplay is overtly simple, I worked on polishing the play experience to squeeze as much mileage as I can out of the simple concept. I experimented with changing audio pitch and background scrolling speed to make the game feel less monotonous and repetitious. A single perfect playthrough lasts around 6-7 minutes.

This is also the first time I created an Android build.

Overall it has been a great learning experience on my road as a budding indie game developer. Do feel free to comment and critique my game as your input can help me improve as a creator.

I look forward to creating new and better games soon!

Loved this. Annoying as hell when you just miss one but so satisfying when you get them all. Great fluid movement,sound and christmas music. Hard to control for people who prefer down to be up in flight games but you get used to it. Top game...  :)

Thanks for enjoying the game and making a video playthrough; I'm pleasantly surprised and very honored ^^;

Good suggestion for a invert-Y control option too, I totally did not think about that one! Exp++

I love the concept of piloting Santa's sleigh. The animations and movement feel perfect and the way the music responds to the game play is a very nice touch!

Thanks for your kind comments! Having the right feel of control and response was a high priority for me. I spent half the development time getting it to a satisfactory stage, including a major rewrite of the movement code, and adding a bit of secondary motion to the (originally stationary and stiff) bag of toys on the sleigh. The second half of the time was spent figuring out how to make 7 minutes of star collection less monotonous, and I hit upon the idea of varying musical tempo and environmental speed. Glad to know all the effort is being appreciated! ^^ 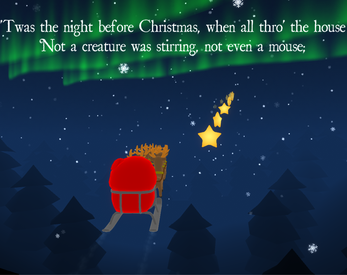 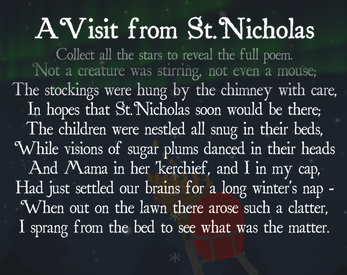